Jack Byrne helps to secure victory for Ireland against Bulgaria

Goals from Kevin Long and James Collins gave Ireland a comfortable victory over Bulgaria at the Aviva Stadium.

After a tepid first half where both teams rarely threatened, Ireland punished the Bulgarians late on to add some gloss to proceedings.

Five Irish players made their debuts on the night, with Mark Travers, Josh Cullen, Jack Byrne, James Collins and Kieran O'Hara all getting their first senior caps.

A quiet opening 45 minutes saw very few chances from either side, as the best chance for Ireland came when Ronan Curtis crossed the ball in from the left-hand side and Scott Hogan failed to connect with the cross which just went right of the post.

Neither side really took control of the game, and the one bright spot for the away team was the performance of youngster Bozhidar Kraev who gave the Irish defence something to think about.

While at one point in the first half Mick McCarthy's team had 72% possession, they failed to capitalise on it and created very few clear cut chances from it. 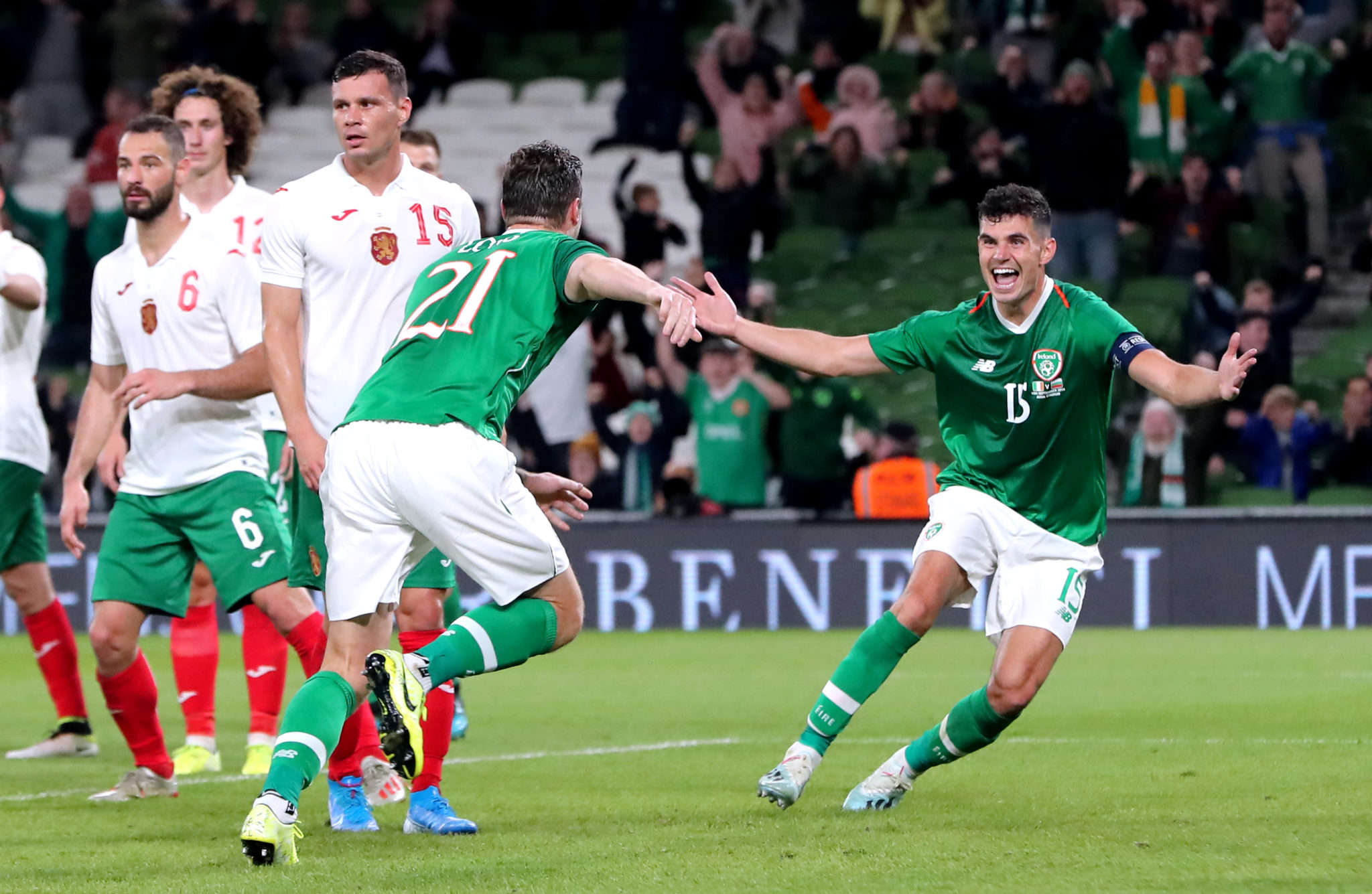 Republic of Ireland's Kevin Long (fourth left) celebrates scoring his side's second goal of the game with team mate John Egan during the International Friendly at the Aviva Stadium, Dublin.

There was more zip to the game in the second half as both teams set out to attack the opposition.

Then just as Bulgaria were starting to get a foothold in the game, Ireland put together a swift counter-attacking move with Alan Browne,  Ronan Curtis and Callum O'Dowda all involved.

O'Dowda held up the ball on the edge of the box before releasing it to Curtis.

The Portsmouth winger rifled a shot at the keeper which rebounded out to Hogan whose follow up shot was saved, finally the ball came out to Browne who tapped it in.

The introduction of Bulgaria's regular captain Ivelin Popov at half time gave their team a new lease of life and despite conceding the goal, the Bulgarians kept pressing for an equaliser.

Livewire Kraev was fouled by John Egan in the 66th minute and the referee gave them a chance to level proceedings with a penalty.

Popov made no mistake from the penalty spot slotting it past Travers who almost got a hand to it.

Shamrock Rovers midfielder Jack Byrne quickened the pace of the game when he came on with an hour gone.

Then, in the 83rd minute, Byrne sailed in a wonderful cross from a corner, giving Burnley defender Kevin Long a chance to head it home with the keeper off his line.

Then with five minutes left, Byrne chipped a deft pass through to Enda Stevens who made a great run on the left-hand side.

His first-time cross connected brilliantly with substitute James Collins who slotted it home on the volley.

"Proudest night ever" - John Egan reacts to his Ireland captaincy