The Women's FA Cup quarter-finals for the 2019-20 season took place over the weekend.  The actio...

The Women's FA Cup quarter-finals for the 2019-20 season took place over the weekend.

The action comprised of the four quarter-final ties. With half of the games going somewhat under the radar, here are five things we learned.

Saturday saw the action from the north London derby between Arsenal and Tottenham Hotspur televised live on BBC 2.

All eyes were on Spurs and the possibility of seeing new signing Alex Morgan get her first minutes for the club. Named on the bench for the tie, it was clear that as the minutes ticked by, fans would be left waiting for the chance to see the World Cup winner play her first game in England.

In the first half, Spurs were impressive in the press and keeping Arsenal at bay, something many have failed to do recently. Arsenal were more like themselves in the second half and as gaps began to appear, more chances were created by the Gunners. It took until the 71st-minute before the deadlock could be broken when Jordan Nobbs picked up the ball outside the box and, with a beautiful strike, opened the scoring.

Arsenal have scored three goals in each of their previous matches this season, with two hat-tricks scored by Dutch international, Jill Roord. This time it was the turn of Lisa Evans from Scotland. Evans played most of last season in the right-back position. With the addition of Noelle Martiz in the summer, it gives Evans the chance to play in her preferred midfield position.

Scoring three goals, the Scottish international showed she can be a threat going forward.

Arsenal put four past their north London rivals, winning 4-0 and securing their place in the semi-final. 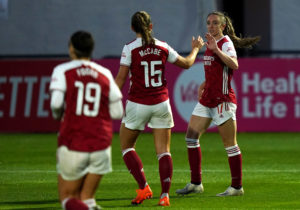 Chelsea travelled to Everton in their last-eight tie. The match took place in an empty Goodison Park. Record signings Pernille Harder and Sam Kerr started up front together for the away side.

Chelsea started brightly and were rewarded with an early goal four minutes in thanks to an Erin Cuthbert strike. The Toffees reacted well though and managed to take control of the game in the middle of the park. Everton were rewarded for their efforts just before half-time when captain Lucy Graham equalised with a diving header. Minutes later they could have taken the lead when Hayley Raso’s effort was cleared off the line by Jess Carter.

Everton started the second half as they finished the first, with lots of positive play, and managed to hold Chelsea off. The Londoners were not without chances, with Everton goalkeeper Sandy MacIver making some important saves. Valerie Gauvin converted a Raso cross to give the Merseysiders the lead.

The 2-1 win over Chelsea not only books their place in the semi-final but marks the vast improvement Everton have made under Willie Kirk and shows that perhaps his side can compete with the top three. 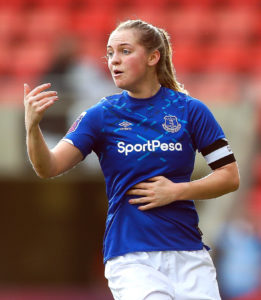 Brighton & Hove Albion took on Birmingham City in one of the less publicised games of the round. Three Irish players took to the field for Brighton, including midfielders Megan Connolly, Denise O’Sullivan, and striker Rianna Jarrett.

Birmingham led for the majority of the match until just before full-time. O’Sullivan headed home to make it 2-2 and send the game into extra-time. With the tie still all square after extra-time, penalties would decide who go on to face Everton in the semi-final.

Connolly saw her spot-kick saved by the Birmingham 'keeper, with the Blues progressing courtesy of a 4-2 penalty shootout victory.

Surprisingly, Manchester City’s quarter-final match with Leicester City was one of the games not televised or streamed live. It would appear, though, that Championship side Leicester gave City a challenge.

A Chloe Kelly penalty in the 37th-minute handed the Manchester side the lead. Georgia Stanway doubled the advantage with a chip over the goalkeeper's head moments later.

In the second half, the home side managed to keep the scoreline down and nick a consolation through a Charlie Devlin penalty.

City will need to convert more of their chances if they are to progress to Wembley over Arsenal. 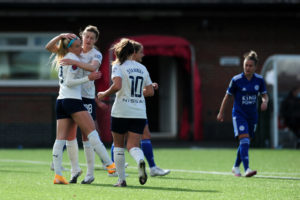 TV stations still have a way to come when it comes to promoting the women’s game. Sure lots of progress has been made, but the build-up to the FA Cup quarter-finals showed that broadcasters are happy to wait until the last minute to decide whether they will air a match.

Only the north London derby was picked up for broadcast. Everton v. Chelsea was available to watch on the FA Player but the other two ties had to make do with highlight packages which were only made available to watch on Monday afternoon. More publicity around these games being on TV is needed. Speaking on the BBC after the Arsenal's win on Saturday, Alex Scott called on players to use their platforms to promote the games.

Both semi-finals will be shown on the BBC, however, this was only announced at the end of last week, giving little time for promotion.

The semi-finals take place this Wednesday and Thursday. Everton will take on Birmingham on Wednesday evening at 7.15pm in a match live on BBC 4. Meanwhile, Man City play Arsenal the following day with kick-off time set for the same time on BBC 2.

WSL | 5 things we learned from Week 5

WSL | 5 things we learned from Week 5