'The adrenalin will be pumping at Anfield' | Shrewsbury boss Sam Ricketts

Shrewsbury Town manager Sam Ricketts is confident his players will be so inspired by playing at Anfield on Tuesday night, they won't need to warm-up.

Ricketts will pit his League One hopefuls against Liverpool in their FA Cup fourth-round replay after the Shrews claimed an unlikely 2-2 home draw, having been 2-0 down, over a week ago.

The former Hull City and Bolton Wanderers defender faced the Reds on their own patch three times as a player and admits that it is an arousing experience.

"It's one of those games as a player that you didn't need a warm-up," Ricketts told Sky Sports News.

"I guarantee that all our lads, and probably the Liverpool lads as well, will turn up tomorrow night and won't need a warm-up.

The underdogs can take some inspiration from Aston Villa who knocked an understrength Liverpool side out of the League Cup in December, with the first-team players in action in the FIFA World Club Championship.

Reds boss Jurgen Klopp is keeping his senior players out of the squad for the FA Cup replay, as it clashes with the Premier League winter break while under-23 manager Neil Critchley is taking the managerial reins from the German for the replay. 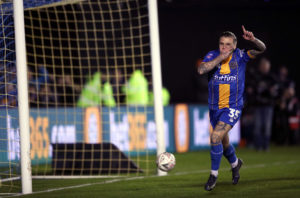 Shrewsbury midfielder Shaun Whalley, who hails from Merseyside, is champing at the bit ahead of the big clash.

"I am very excited, I’ve waited 32 years to play at Anfield and I’m really looking forward to it," said Whalley speaking to shrewsburytown.com.

"It will only be a good game for us if we win.

"I think we definitely deserve the replay and thought we could have won the first game. In the end, I was glad we drew so we could go back to Anfield. We will expect a similar team to the first round.

"We have trained as normal and did all of our match preparation as we normally would do. Everyone is looking forward to it, training was just a normal day. It will be a proud moment walking out at Anfield."