Going professional is not going to solve the issues in Irish women’s rugby, according to Irelan...

Going professional is not going to solve the issues in Irish women’s rugby, according to Ireland legends Niamh Briggs and Alan Quinlan.

Last week’s 56-15 loss against France highlighted that there was still a gap between Ireland and the professional and semi-professional teams.

While some have suggested that the gap is not as big as the scoreline suggests, there is no argument that it still exists, and that until Ireland becomes professional as well, there is danger of it getting bigger.

However, Briggs believes that there is a bigger issue than professionalism for Irish rugby.

“I don’t think that if we threw 30 contracts at players tomorrow morning it would close that gap,” Briggs said on the Women’s Six Nations Show on OTB in Association with Guinness. “It simply wouldn’t.

“The structures and the pathways just haven’t been there. They are starting to be put in place now, but it will just take time unfortunately.

“It is not really a quick fix, and in order for this game to have sustainability and longevity, it has to be done right.”

Quinlan who joined Briggs on Thursday’s show, agreed, suggesting that the only way to successfully close the gap is to encourage women and girls to play rugby at a grassroots level.

“Obviously you want the IRFU to support it and drive it and fund it when it happens,” Quinlan said.

“I agree with Niamh, I am not advocating to give out 30 contracts and it is going to solve the problem and the girls can go away and train full time.

“It would help, but it is a bit of a stop-gap. The key here, and it is the same in the men’s game, if you are trying to expand your playing numbers and get more players playing, you have to get out into communities.

“You have to get development officers going, you have to get into schools and encourage young girls that this is enjoyable, and this is something that brings people together, the game of rugby.

“Try and encourage them to get down to their local club, and at schools, get more schools playing the game as well. 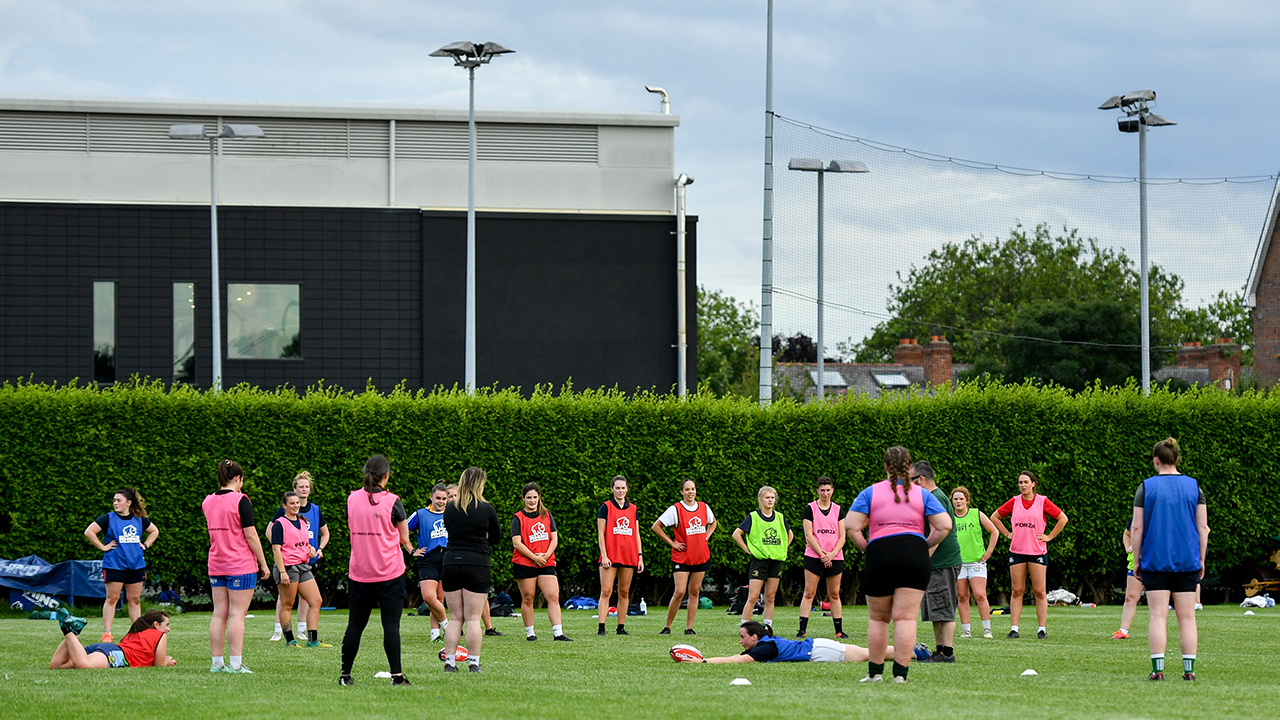 A general view during Railway Union Womens Rugby squad training at Railway Union in Sandymount, Dublin. At Park Avenue, Sandymount the Railway Union RFC women's squad trained as the club continue their preparations for the Competition Rugby Stage, which is the final stage of the guidelines and when competitive games will begin again. Photo by Ramsey Cardy/Sportsfile

Grassroots rugby is the way forward

Quinlan believes that it is not only the IRFU that need to promote the game at a grassroots level.

“Every rugby club in the country should try and develop the women’s game within their club,” Quinlan said.

“Underage teams and adult teams as well. They bring a huge vibrancy and energy into the club, they increase enthusiasm, they increase the numbers, and the whole profile of the club.

“I remember when my junior club Clan William started a ladies’ team, they had brilliant success and they went on to win a Munster Cup.

“We were getting bossed around by the women a bit on the committees, and they wanted their place at the table.

“All that stuff was brilliant, and there was real change within a male-dominated sport and a rugby club that was dominated by men.

“That was really brilliant.”

Ireland take on Italy in the third place final of the 2021 Women’s Six Nations in Donnybrook on Saturday. Kickoff is at 12pm, live on RTE2.