Saturday’s loss to France is not a representation of the gap between Ireland and the top two si...

Saturday’s loss to France is not a representation of the gap between Ireland and the top two sides in the Six Nations, according to former Ireland captain Fiona Steed.

Ireland received a firm reality check on Saturday, losing 56-15 to a semi-professional French side, a week after demolishing a poor Welsh team 45-0.

Heading into the match against France, the Irish were firm in their belief that they could hang with the professional and semi-professional sides England and France respectively, suggesting that the gap was getting smaller.

While the score line would suggest that there is that gap, Steed suggested that Ireland’s performance flattered the French.

“I don’t think the gulf is as big, even if we played them again this week to be fair,” Steed said on Monday Night Rugby on Off The Ball.

“It was a poor performance and I think that is the first thing that we need to look at. The performance of the Irish girls was poor on Saturday.

“They are better than what they did, but it is still what we are judging them on.”

Ireland conceded a number of quality tries against a very good French side, however some of their defensive structures and decision making was not up to their own standard, according to Steed.

“I don’t think we can judge the overall judge in class based on that one performance,” Steed said.

“Add to that their continuity and their ball in contact [needs improvement]. The French number 11 ripped the ball twice and it ended up in two tries. There were lots of poor pieces.

“[Even though] two lineouts ended up in lineout maul [tries], we lost five lineouts. So, it wasn’t a good performance.”

With Ireland and the rest of the Six Nations sides not on the same level of professionalism as France and England, there will inevitably be a gap between the quality of those teams.

However, Steed believes that Ireland need to show that they have improved on Saturday against Italy in order ensure that the gap does not get bigger.

“I expected more from them and I think they are better than that,” Steed said. “The gulf in class [is there], but it is not as big as that.

“The concern is, will the gulf get bigger? What do we do about that? We will see on Saturday two really good teams going head-to-head in terms of England and France.

“We will see that, and it will be excellent. Then we will see two teams in Ireland and Italy that are battling for third position.” 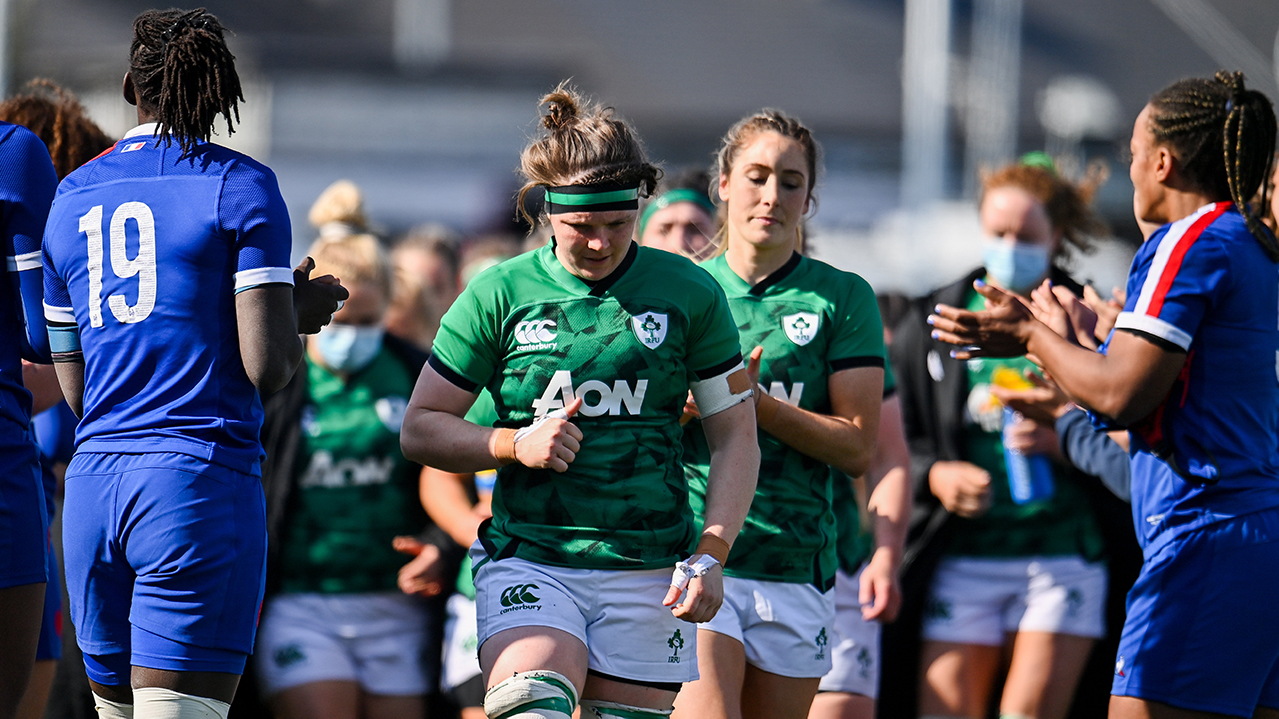 Ireland captain Ciara Griffin and her team-mates leave the pitch after the Women's Six Nations Rugby Championship match between Ireland and France at Energia Park in Dublin. Photo by Sam Barnes/Sportsfile

While third place is not ideal, Steed suggested that it will still be good not only for this side, but the future of women’s rugby in Ireland.

“If, at the start of all of this, I was told ‘well if Ireland finished third is that a mark of progress?’ then I would say ‘yes, it is,’ and I still stick to that,” Steed said.

“If we finish third and if we put in a really good performance and comprehensively beat Italy, it won’t be easy by any stretch, but we need to put in the performance that we did in the autumn against them.

“We need to beat them convincingly, and then I would still see third as progress.”

Steed has seen a lot of improvement over the past two years for the Irish squad and criticised some people who are ready to give up on the side after one poor performance.

She suggested that, if Ireland finish third and continue to build the structures underneath the senior squad, it will be a definite sign of progress.

“The pace of progress and the pace of change for some people isn’t good enough,” Steed said.

“There will be people that jump on a happy bandwagon and are also happy to blow up the bandwagon when things go wrong as they did on Saturday.

“For me, to be in the top three is progress and it is where we need to be while we continue to build the structures that are underneath.”