Ireland hosted Italy in Musgrave Park on Sunday, with both sides in search of their first win in the 2022 TikTok Six Nations.

Ireland hosted Italy in Musgrave Park on Sunday, with both sides in search of their first win in the 2022 TikTok Six Nations.

It was the first time ever that Ireland had hosted a test match in the Cork stadium. While both sides were in search of form, the hosts came into the match as favourites, with the return of Beibhinn Parsons to the starting lineup.

Greg McWilliams had made three other changes to his starting lineup from the team that had lost to France a week earlier, with Kathryn Dane, Christy Haney and Hannah O'Connor all coming into the XV.

Italy came into the game fresh off their 74-0 defeat to England at home a week earlier. It was the visitors that got on the board first, though, through a Beatrice Rigoni penalty.

Ireland were the first to cross the whitewash, after repeated pressure eventually allowed Kathryn Dane and Nicole Cronin to put the ball in the hands of Lucy Mulhall out wide.

Lucy Mulhall scoring a beauty of a try, but how about that pass! | 👀#NothingLikeIt pic.twitter.com/oCpb8iZ2PS

Amee Leigh Murphy-Crowe looked to have scored the second try for Ireland, however the referee decided that she had been held in the tackle and so was penalised when she got up to score. This was in spite of the TMO asking for a referral.

Italy went down to 14 after Elisa Giordano was yellow carded in the 33rd minute for repeated infringements by the Italians.

With the one player advantage, Ireland continued to apply pressure and eventually Neve Jones crashed over from the back of the maul for their second, to take a 10-3 lead into half time.

Ireland looked much more threatening with ball in hand from the opening minute of the second half. A chip kick onto a full-flight Eve Higgins from Dane lead to their third try of the game.

As they started to gain confidence, they began to try more creative moves in the backline, opening the game up. This eventually lead to a well-positioned scrum that resulted in a penalty try for the bonus point.

While Melissa Bettoni scored what seems to be an obligatory score for her against Ireland late in the second half, the match was all but over.

However, Katie O'Dwyer poached the score right back in the final three minutes of the game, pouncing on a loose ball inside the Italian 5m line for the try.

The score would round out a vastly improved performance for the women in green. While they should not get carried away with a big win over Italy, they can only play what's in front of them, and a 29-8 victory was well-earned. 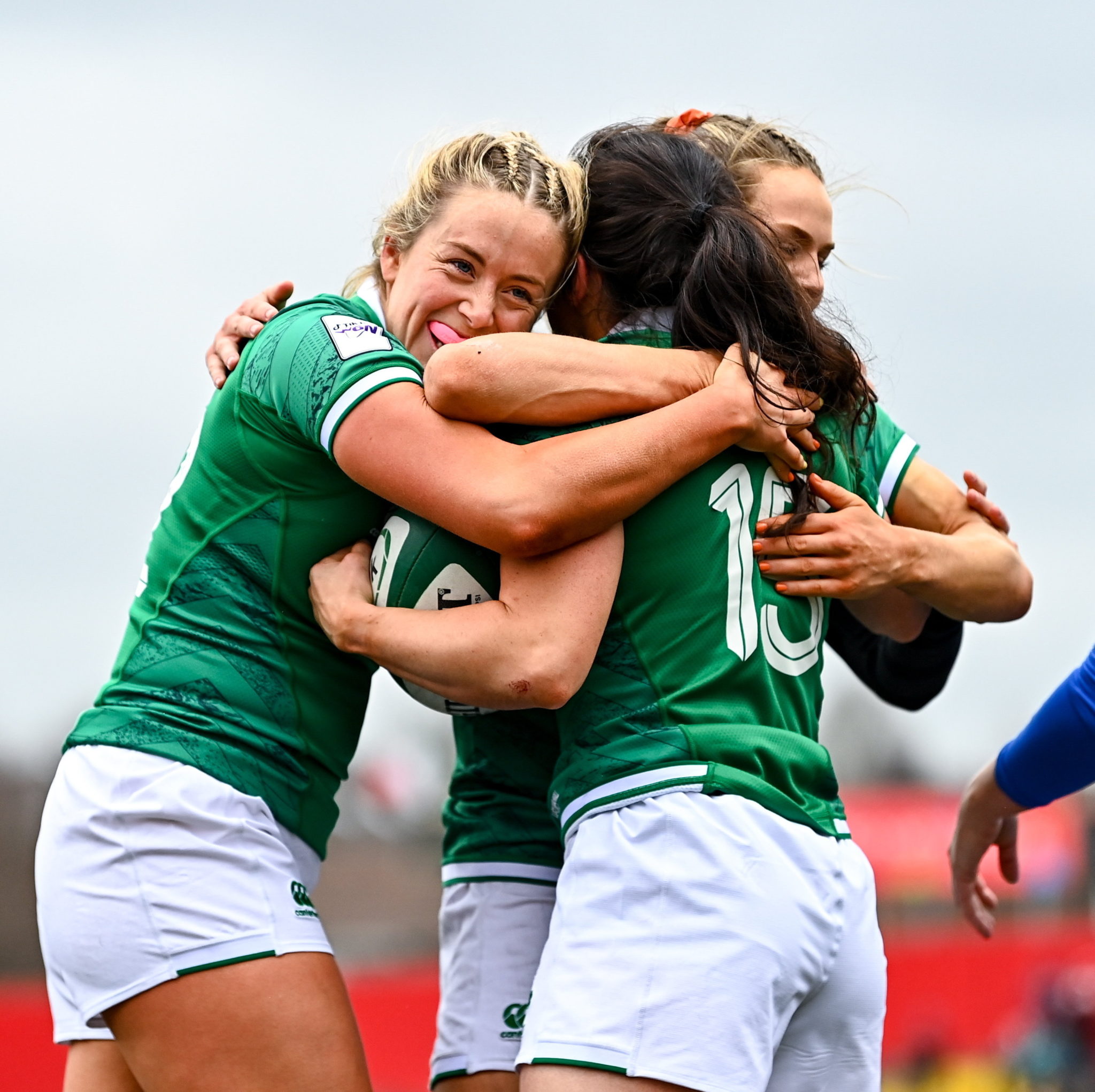 Djougang is fast becoming one of the best players in this Irish squad, with her power and work rate being unparalleled in green this season.

She makes a massive amount of meters for a front rower, and is defensively one of the most committed players on the park.

Ireland has struggled to maintain possession throughout the championship, with the lost lineouts being a particular case of frustration. While not every lost lineout can be blamed on the throw of Jones, a number of them can be, making the absence of Cliodhna Moloney from the squad continuously baffling.

However, Jones has been exceptional on defence, and was one of the best defenders again in Musgrave Park. She scored a great try from the back of the maul, after rectifying some of the lineout woes in the first half.

Ireland seemed to have fixed their lineout woes for now, and the result is Neve Jones crashing over from the back | 🏉pic.twitter.com/Cp4naDia8p

The Irish scrum had struggled against France, however Haney seemed to steady that ship almost immediately against Italy. Her first scrum was dominant, and that trend continued throughout the first half and into the second.

While the scoreboard will read 'penalty try', the Irish bonus point should go to Haney and Djougang for their dominance at scrum time.

The Irish captain goes about her business in an understated manner, happily allowing the exciting players in the backline take the headlines. However, while the lineout seems to continue to be hit and miss, Fryday was crucial in helping Ireland improve their possession stats from the previous two weeks.

She was ever-present at the breakdown to secure Irish ball, and even managed to make some meters with ball in hand. 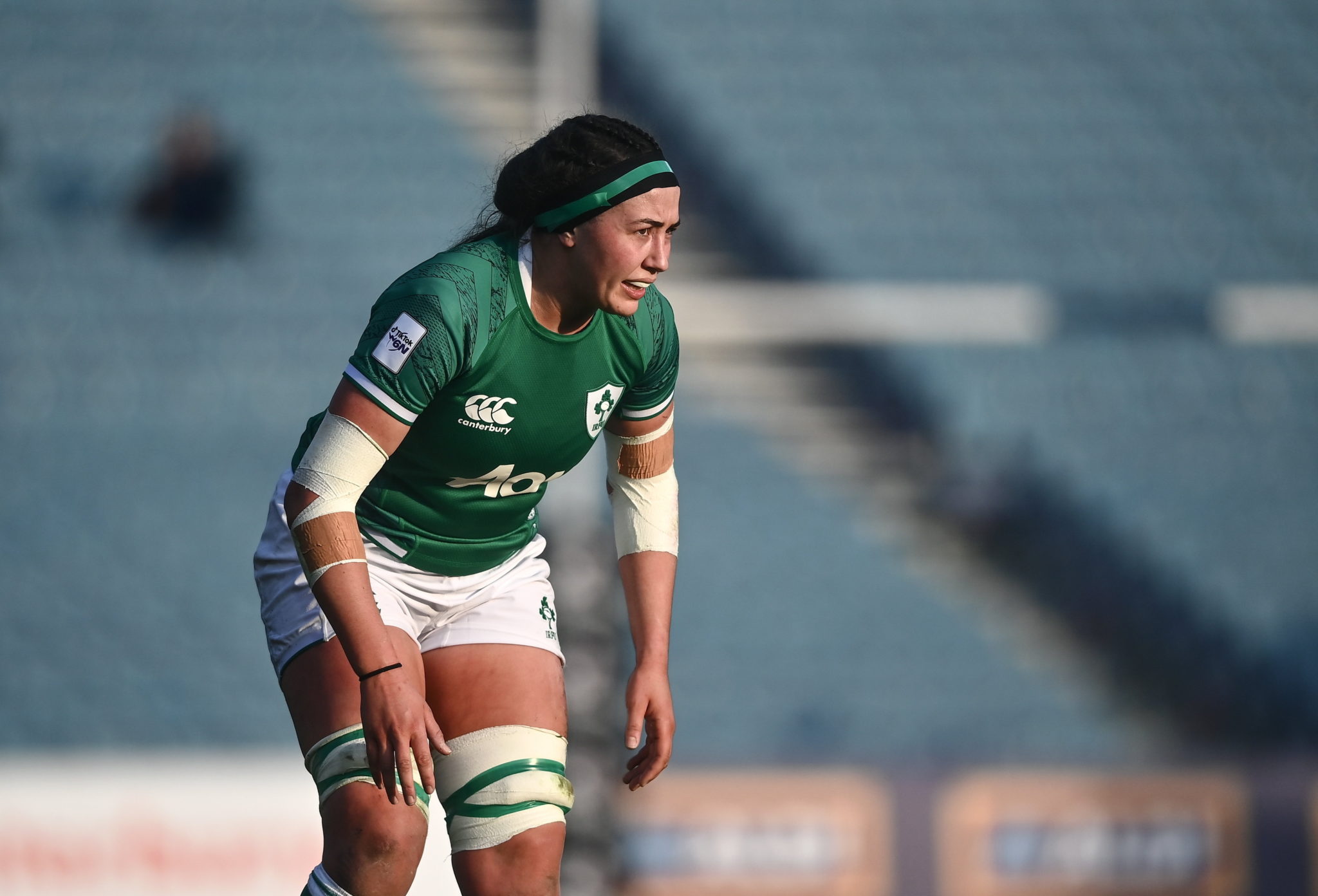 Much has been made over the last two weeks of Monaghan's offloading ability, however it was her defensive work that paid dividends for the Irish early on.

In a complete performance, Monaghan is fast becoming a player akin to Tadhg Beirne for the men's team: undroppable, and could easily slot into the loose trio.

Dorothy Wall is a tackling machine. Almost every single tackle she puts in is a dominant tackle that puts the attacker backwards.

However, with ball in hand Wall was outstanding against Italy, making huge carries, support running and getting Ireland over the gain line.

It was an outstanding performance on both sides of the ball for McMahon, as she and Wall seemed to be having a competition for who could make the most tackles and meters in the same game.

The flanker was involved in almost everything, and after 70 minutes was still looking to crash the ball out from distance off the flat pass. 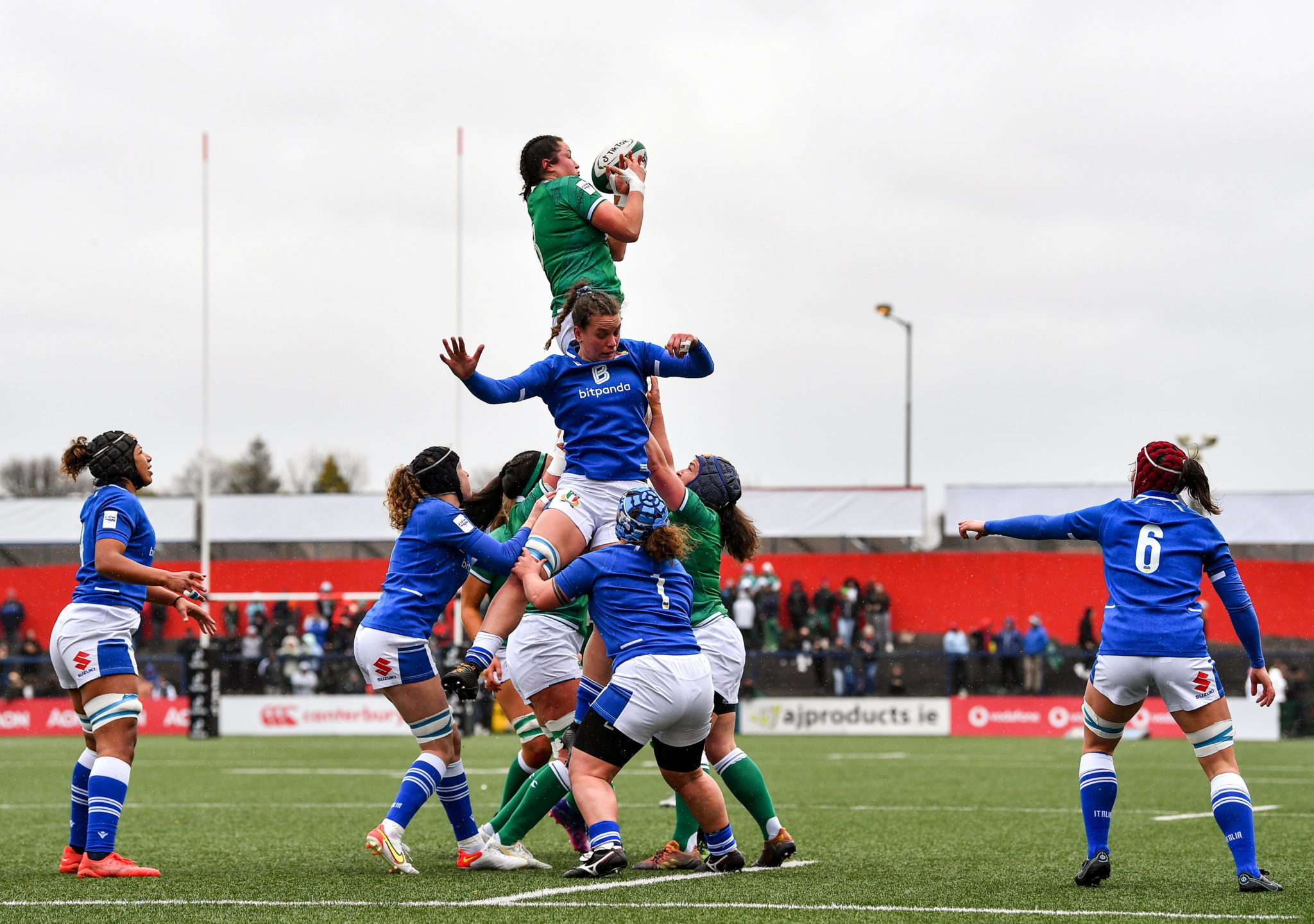 The Irish breakdown was vastly improved against Italy than it was in the first two rounds of the championship, thanks in no small part to O'Connor's work in the loose. She did not take the glory of the carries like her backrow teammates, but she opted to do the hidden work in a much-improved performance for the hosts.

She did, however, find herself offside a few times from kicks from hand.

While Aoibheann Reilly made little errors in her first two starts, the difference in experience was clear from the start as Dane looked more accurate with her passing and was quicker with her decision making early on.

She controlled the game well, orchestrating both the forwards and backline superbly throughout. In what could have been the moment of the match, Dane's chip kick for Eve Higgins' try showed her class and the range that she brings to the nine jersey.

While it was still not a perfect performance, Ireland seemed to have finally found their preferred choice at outhalf as Croning and Stacey Flood make an excellent 10-12 partnership. With Dane's excellent distribution and effective control of the field, Cronin was freed up to be the creative playmaker that she has the potential to be. 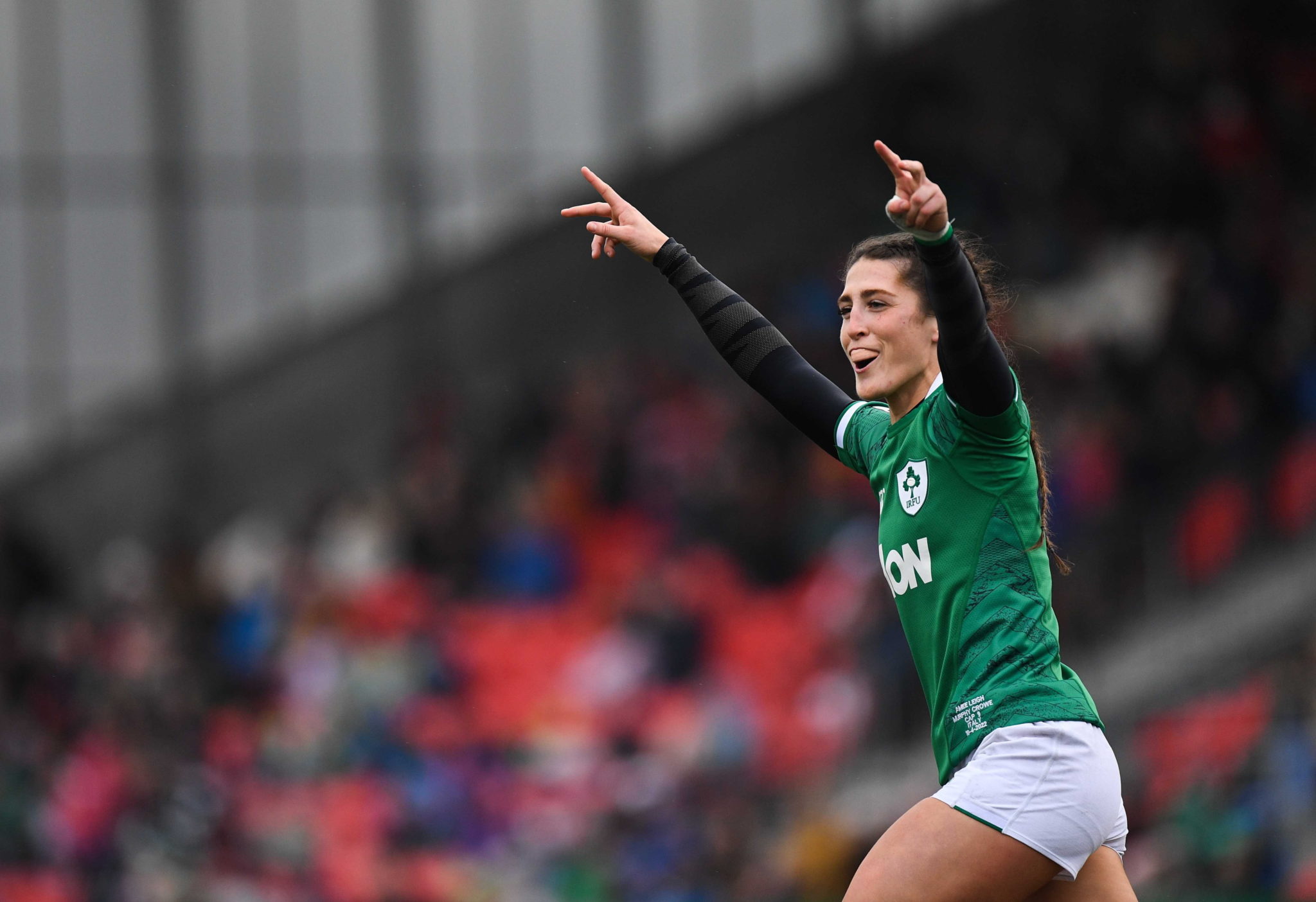 While an argument could be made that she was robbed of a try in the first half, Murphy-Crowe showed all of the excitement and running that has been expected of her since making the move from Sevens to XVs. Her defensive reading of the game is not perfect, but it was vastly improved on last week.

Having a second playmaker the likes of Flood at 12, particularly with the attacking threats scattered throughout the Irish backline, is exactly what this Irish team needs. Flood being in form only makes this Irish backline more threatening.

Her ability with the boot helped get Ireland out of trouble a few times, but more often it was used as an attacking weapon in the second half. If only a large portion of this Irish side were not also going to be playing Sevens at the end of April.

Higgins has the potential to be one of the best centres that Ireland has produced, if she manages to maintain her XVs form when she comes back from the next Sevens tournament. She reads the game superbly both on attack and defence in the 13 channel, and has made some of the most line breaks in the competition thus far.

She scores tries for fun even in losing efforts, and it is surprising that she is still an understated player in this exciting Irish backline.

The much-anticipated return of the 20-year-old superstar to the starting lineup was met with a somewhat anti-climatic, muted start. She over-eagerly shot out of the line midway through the first half to open up the gap for Aura Muzzo to break through and put together the best Italian attack of the half.

However, she made up for that quickly with an excellent tackle and read that put Ireland into a strong position in the midfield and ultimately led to what should have been Ireland's second try which she herself helped create in the build-up.

In her first selection at fullback in the XVs game, Mulhall looked as if she was learning on the fly in terms of positioning in the back field and clearing kicks.

However, her ambition and desire to run the ball from the back on the counter-attack was admirable and she often made more meters than she likely had a right to. She scored an excellent try off the back of a brilliant skip pass from Cronin to put Ireland into a first-half lead.

The Women's Six Nations on OTB Sports, in association with Vodafone. Proudly supporting the Irish women’s rugby team. We all belong to the Team Of Us