Why women cannot follow men into professionalism | Cantwell and Hayes

Women cannot follow men into professionalism as they have very different needs and histories, acc...

Why women cannot follow men into professionalism | Cantwell and Hayes

Women cannot follow men into professionalism as they have very different needs and histories, according to ex-Ireland players Lynne Cantwell and Fiona Hayes.

Ireland finished third in the 2021 Women’s Six Nations in association with Guinness, firmly cementing themselves as the ‘best of the rest’ in the competition.

‘The rest’ here refers to the four teams in the Six Nations that do not have a professional or semi-professional structure in their international set ups.

Following their big loss to France in their second match of the Six Nations, many people have brought up a desire to go professional in order to compete against the semi-professional and professional teams on the world stage.

Speaking on the Women’s Six Nations Show on OTB in Association with Guinness, former Ireland internationals Cantwell and Hayes were not convinced that simply going professional akin to the men will be the solution.

“Realistically we are at a crossroads,” Hayes said. “As are a lot of countries; I have read articles on Wales in a similar situation.

“Men’s rugby and women’s rugby are completely separate, they have always been separate.

“It is a different game; rugby is a beautiful game, but when I look at it, I look at it differently because I know what goes on behind the scenes, I know where the players are coming from, I know how often they train, and all that kind of thing.”

For Hayes, the important thing is that the clubs on the island all improve and raise the standard of women’s rugby.

“I think the focus needs to shift,” Hayes said. “We want to qualify for the World Cup, that is obviously our main aim as a country.

“Hopefully when we can get that we can really focus on getting the girls back to clubs and trying to bring up the standards in the clubs.

“For women’s rugby, it is about getting the [10 top AIL] teams playing at a high level where the girls are playing games week-in-week-out at a very high level, so that when they get to those camps and that Irish situation, they are not under as much pressure, because they have felt it.

“They have felt it in the games they’ve played and they’ve had their S&C [strength and conditioning]; their S&C is going all year round.

“It can’t just be a big jump for Irish women’s rugby, I think we have to look at the structures beneath it.”

The development of women’s sport is still very new, according to Cantwell, which is why there is still a great need to build up the structures before professionalism can be implemented.

“We have to keep recognising that women’s sport in general is still a relatively immature sport,” Cantwell said.

“As such, we have to recognise that we have to guide it through the mature phases towards professionalism. I think it is a really good dialogue.

“I am actually more pro a semi-professional structure at the start and then a move towards pro. Although technically pro in the women’s game is probably still semi-pro in the men’s game.

“What I mean by that is that I am very pro girls and women having a second focus. I think mentally it is a good thing; developing off the pitch as well as on the pitch.” 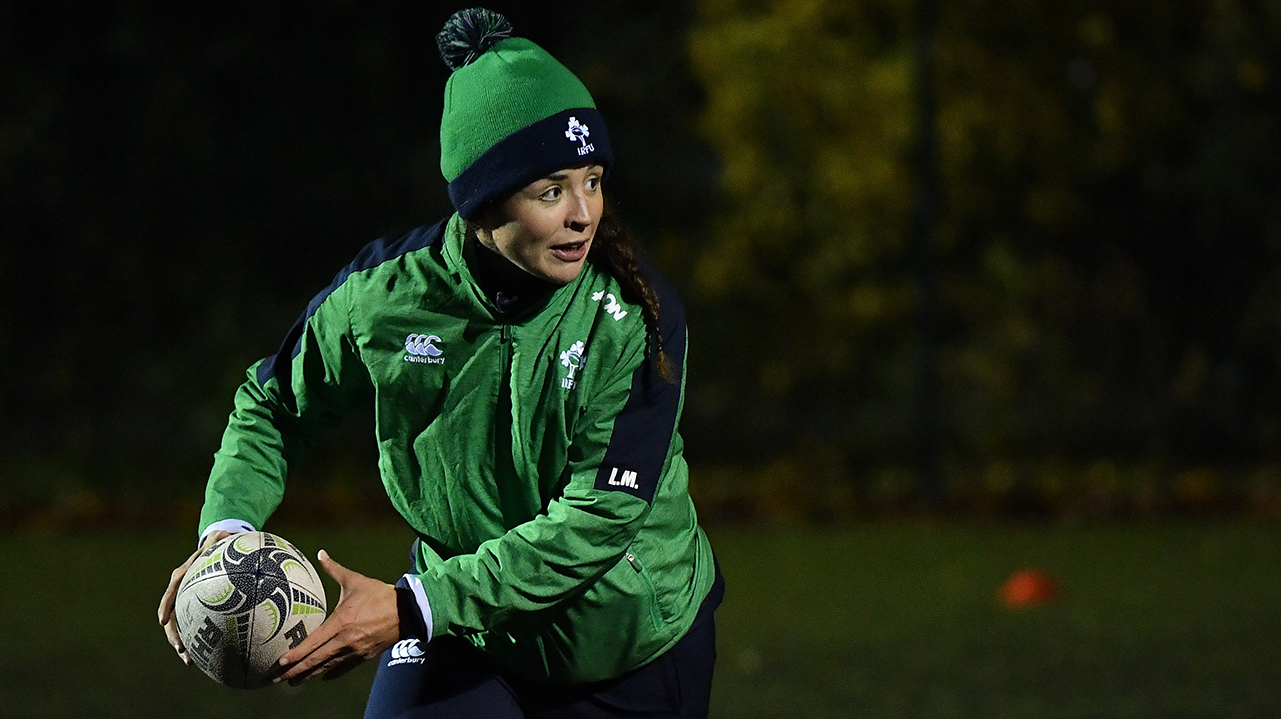 Leinster and Ireland rugby player Larissa Muldoon at a Leinster Rugby Give it a Try Girls Rugby Training Session at Coolmine RFC in Coolmine, Dublin. Photo by Piaras Ó Mídheach/Sportsfile

Cantwell pointed out that men and women have different needs in terms of their professional contracts, in no small part due to their different stories.

“I think women in sport in general, I think, there are different nuances to men’s sport, and I think you capture that through them being semi-professional,” Cantwell said.

“If you ask most guys, they perform and get to the top through their academy structures, they are identified, they play under-20s, and it is usually the same narrative.

“The stories behind the women’s game, if we listen to them, there are different nuances around the sport and women’s rugby, and if we understand that, then we build the structure around that.

“What it will do is it will have things that are a little bit different, so we would have stuff like maternity contracts; women are women, and they might get pregnant. Those kinds of things are very important.” 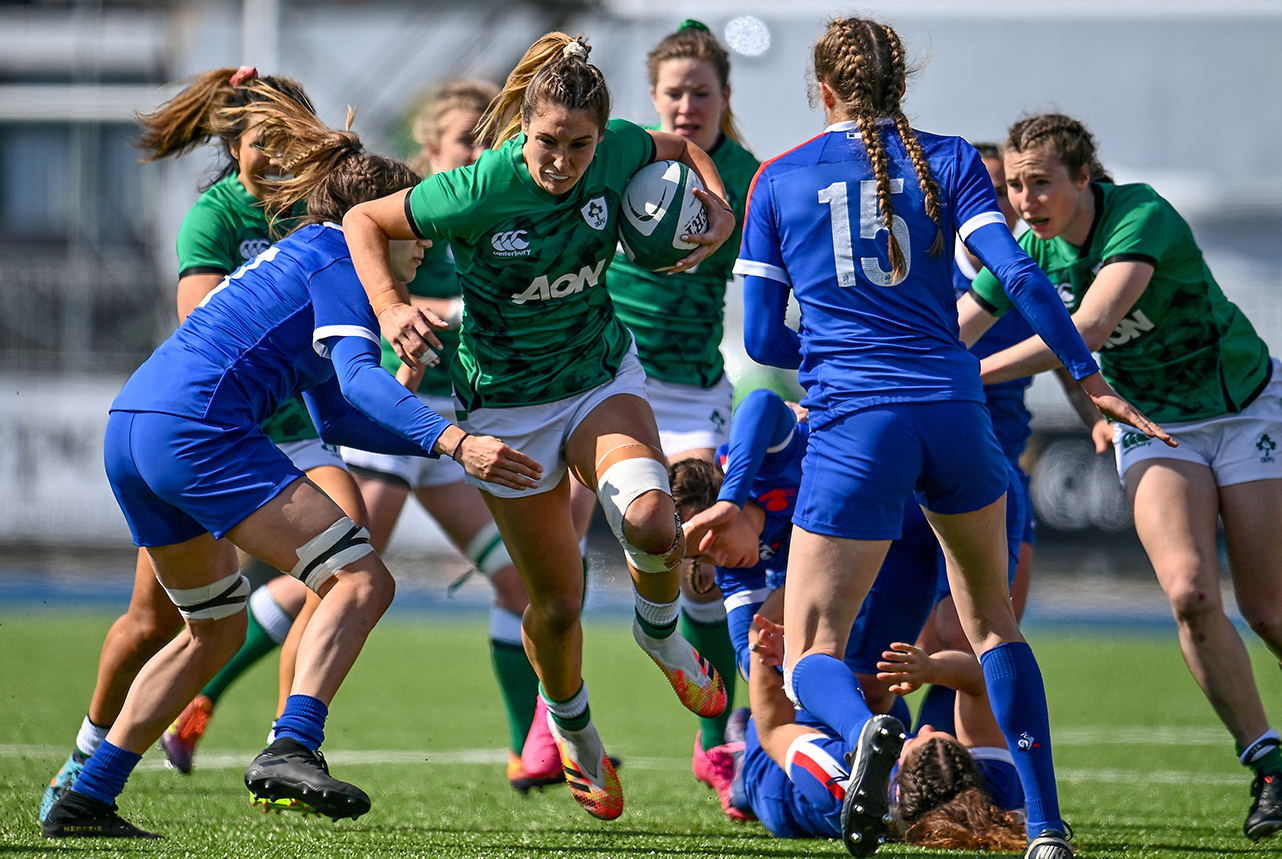 Eimear Considine of Ireland is tackled by Gaelle Hermet of France during the Women's Six Nations Rugby Championship match between Ireland and France at Energia Park in Dublin. Photo by Sam Barnes/Sportsfile

Cantwell stressed that simply following the men’s route to professionalism will not work for the women.

“I think we need to look at it and design it according to what we have and where we want to go as opposed to just presuming that we need to go down the men’s route,” Cantwell said.

“There is a little bit of apples and pears here, they are very similar, but there are lots of really great differences.

“When we do that, we allow sponsors to recognise that; us as women are able to identify with that more acutely and then live it and embrace it and live it.”

There are some promising signs on the horizon, as IRFU High Performance Director David Nucifora has been planning to grow the women’s game since before COVID-19.

“People like to think throw cash at it; it is not that,” Hayes said. “It has got to be worked in a way that we are getting more girls playing, more athletes and getting them to stay in the game, but also getting that high standard of game.

“David Nucifora said before the competition that he doesn’t want professionalism just yet, but he wants to increase the pool size, creating a pathway for young women and girls.

“They are talking about it and I suppose it is about getting out there and doing it. We can’t really comment, because no one has had normality in the last year and a half.

“From that perspective they have chatted about it and now moving into the new season, we can see that they are really going to invest in the clubs and try and get that standard up.”