Ireland looked to finish on a high and avoid the wooden spoon in the TikTok Six Nations as they hosted Scotland in Kingspan Stadium on Saturday.

Ireland looked to finish on a high and avoid the wooden spoon in the TikTok Six Nations as they hosted Scotland in Kingspan Stadium on Saturday.

Greg McWilliams was forced to make a host of changes ahead of Ireland's last outing against England. In spite of this, though, his side held kept the eventual Grand Slam champions to just 10 points in the first half of that match.

However, the cobbled together Irish 23 would ultimately fall victim to a 69-0 scoreline against England, and suffered a number of injuries in the process.

As a result of those injuries, McWilliams was forced again to make a few changes, including bringing back Nikki Caughey for her first international in almost three years, and providing a debut for Vicky Irwin at fullback.

Despite a strong defence showing from the Irish forwards up front, Scotland's Evie Gallagher eventually crashed over for the first score of the match in the fifth minute.

Ireland are starting to settle at Kingspan Stadium, but find themselves behind after this early Scottish try.

Ireland absorbed a lot of pressure throughout the remainder of the first half, and scored eight unanswered points through the unlikely source of Hannah O'Connor's boot, and the more likely maul try for Neve Jones.

Helen Nelson's boot put Scotland back in the lead in the second half. However, Ireland looked to get back into the match placing Scotland under pressure late in the match.

With possession in front of the posts in the final minute of the match, Ireland needed a converted try to win the match and avoid their first wooden spoon since 2004.

It was Enya Breen that managed the feat in the 84th minute of the match, busting through a resolute Scottish defence to score and leave herself the conversion to win the game. Calm as can be, she slotted the conversion to earn the 15-14 victory and finish fourth on the Six Nations table.

The Irish scrum was dominant at first, reducing to just solid for the rest of the match, but Djougang was the outstanding anchor of the setpiece. She defended her try line well in the trenches, along with the rest of the forward pack.

Right on half time Ireland hit the front, with Neve Jones touching down for the try.

While her work off the ball is second to none in most teams, the one thing that Jones needs to get right first and foremost as a hooker is the set piece, and unfortunately the lineout was the biggest issue yet against Scotland. The scrum was outstanding, however both through poor throwing and poor jumping, the lienout yet again faltered and made it difficult for the home side to maintain possession.

However, Jones carried ferociously, and defended like a Trojan as well, and should not be judged poorly for her set piece work alone. She was excellent on defence in particular. She just needs to fix her set piece.

Haney was exceptional at the maul defence early on, which was an area of great concern in the defeat to England. Her work on her own try line to keep Scotland out with good field position was second to none. Additionally, along with Djougang, Haney was powerful in the scrum too.

While Jones has not been the most accurate darts thrower in the campaign, the first missed lineout of the day was down to a knock-on from Fryday with no real pressure on the captain.

The Irish captain defended well, and worked hard to make up for her earlier errors, however was not able to make to impact the game nearly as much in the carries as she would have liked. 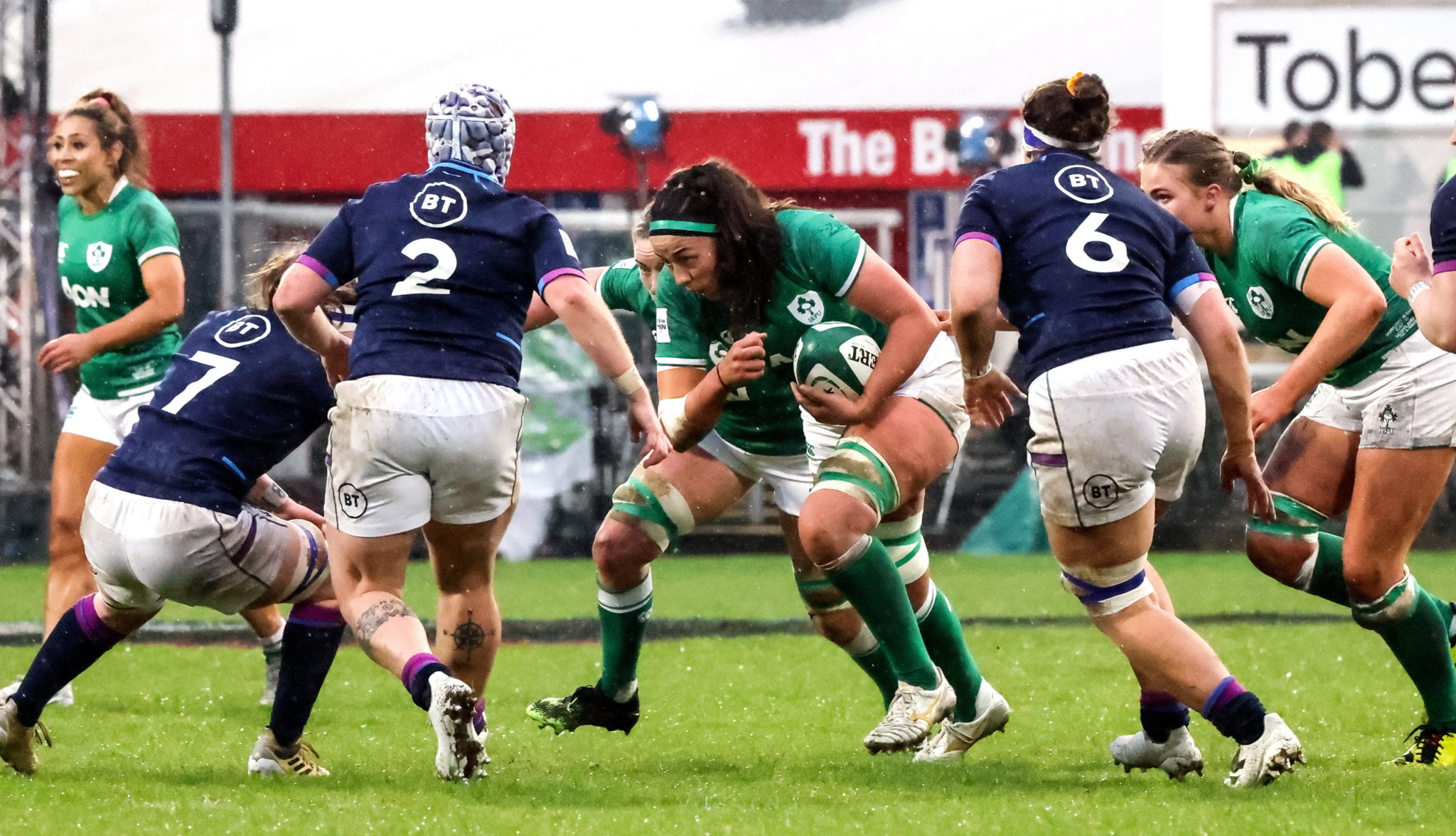 Affectionately-named 'Sonny Bill' Monaghan, the big second rower was made a welcome return to the Irish starting lineup. She added exceptional tackling ability to her work to secure and maintain possession, often recovering 50/50 ball at the lineout.

The 21-year-old is one of the best carriers that Ireland have, and they would do well to put the ball in her hands more often. She racked up a number of powerful carries and meters, and was no slouch on defence either.

While O'Connor and Wall did the grunt work up the middle, McMahon looked to link the forwards and backs together with some offloads and linking carries. While it was more of a game for the up-the-jumper stuff, McMahon did well in the loose and performed her role as the link forward well.

It is not every day in the modern era that the best goal kicker is a forward, but O'Connor was a welcome replacement for the injured Nicole Cronin on the kicking tee. Additionally, the number eight was everywhere on both sides of the ball throughout.

Dane's box kicking was inaccurate or otherwise ineffective early in the first half. While her experience and level head were vital for Ireland against Italy, Dane was not at her best in the difficult conditions. Her passing was nowhere near as crisp as it has been in the past.

Caughey has not played an international in over 1000 days, however she made a strong account of herself in a makeshift backline. While it is never easy to slot into such an inexperienced backline, Caughey did well to control the set plays as well as she did, particularly in such poor weather conditions.

Like Doyle on the opposite wing, there was little to no ball for Scuffil-McCabe to work from. She was not asked to do a whole lot on defence, and was unable to get overly involved on attack, with carries being kept in field. 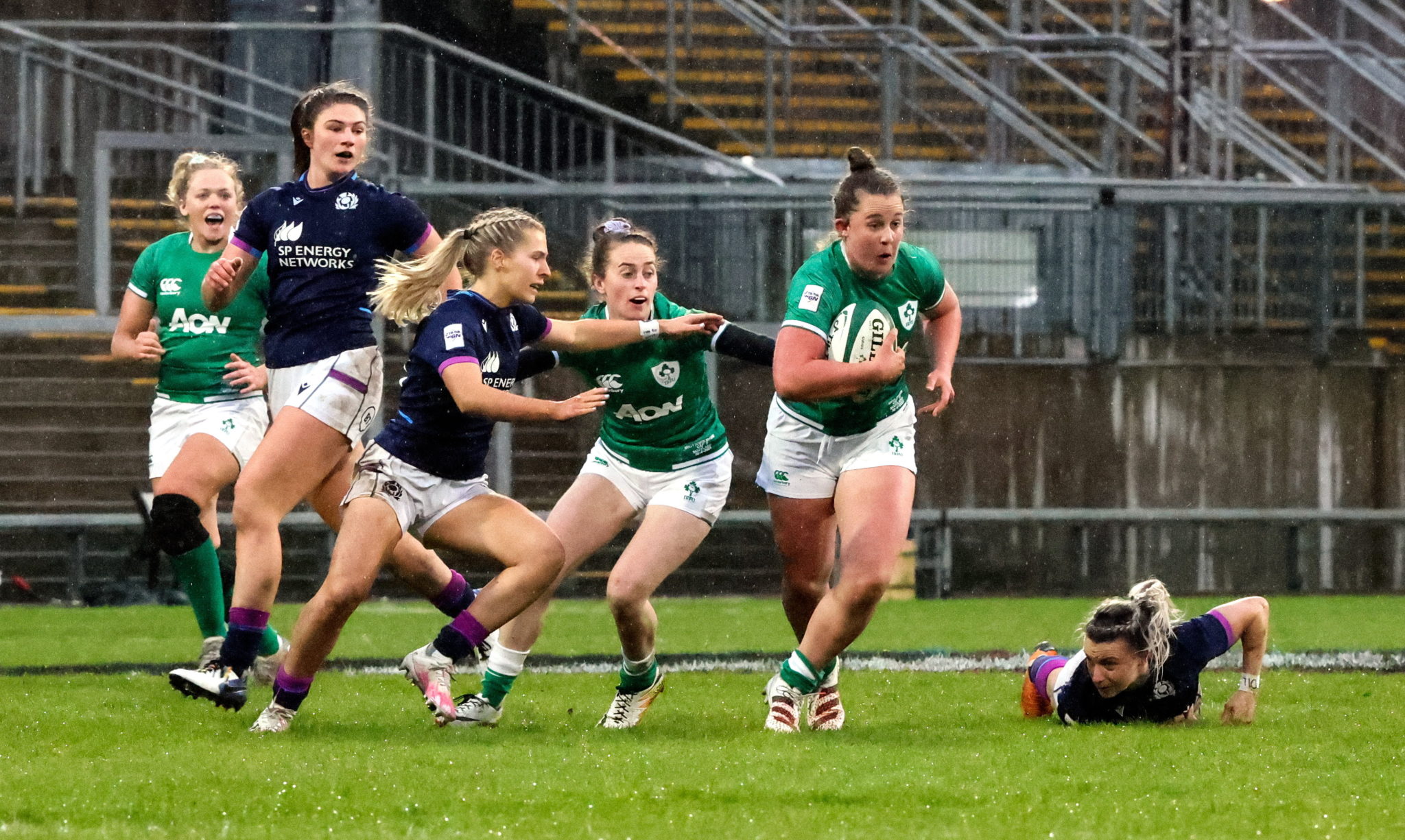 Breen made the best line break of the first half, and could have wrapped up an excellent score, if it weren't for a mis-fired offload ending the attack. However, with all of the disruptions to the Irish backline, Breen did well to settle the side and take control in the midfield.

Her composure and effort in the dying minutes to secure the converted try and the win gave her an extra perfromance point too!

While Naoupu's inclusion in this match was a welcome addition, after her red card against England was overturned, her performance against Scotland left something to be desired. She struggled to hold onto the ball in contact and was passive on defence when onside.

It was not a day for the wingers in Belfast, with weather conditions forcing play to take the shape of the kicks and close-quarters carries, particularly for Ireland. When she did have ball in hand Doyle looked dangerous, and even looked to link up with Scuffil-McCabe on the opposite wing.

There is something to be said for debut nerves, however Irwin's first touch eventually resulted in Scotland's first score as she ran herself into trouble and gifted the penalty and field position that Gallagher scored from.

While she did not have too many carries or touches after that first error, the young debutant did her best to make up for that early mistake and looked to grow in confidence as the game went on.

The Women's Six Nations on OTB Sports, in association with Vodafone.