Ireland are in danger of getting left behind in the women’s game if they do not go professional...

Ireland are in danger of getting left behind in the women’s game if they do not go professional soon, according to Philip Doyle and Louise Galvin.

Women’s rugby in Ireland is currently non-professional, meaning that the majority of players playing in the Six Nations this weekend have day jobs outside of rugby.

Only a handful of players in Ireland have had a competitive match since the last Six Nations match against Italy in October last year.

Compared to the likes of England, who are fully professional, France, who are semi-professional, and Scotland, who have nine professional players in their squad, Ireland are on the back foot when coming up against these nations.

Speaking on the Women’s Six Nations Show on OTB in Association with Guinness, former Ireland and Scotland coach Philip Doyle said that he was worried about how a slow-burn expansion into professionalism is affecting the women’s game.

“It is a worry for me that England are just going to pull too far away,” Doyle said.

“We all know that the girls have put in an absolutely massive amount of work into this, but you cannot account for full professional players coming up against them; they will struggle.

“The game is moving on at great pace off the pitch. There is a lot going on, but the unions are just going to have to just get behind the girls as much as possible from a financial point of view.

“I know it is incredibly hard right now, but in the coming years, the gap is going to get wider unfortunately.

“The girls are doing everything they can, but you can’t account for that.

“We are in trouble, but let’s hope it changes rather soon because the girls can’t just keep going the way that they are going.” 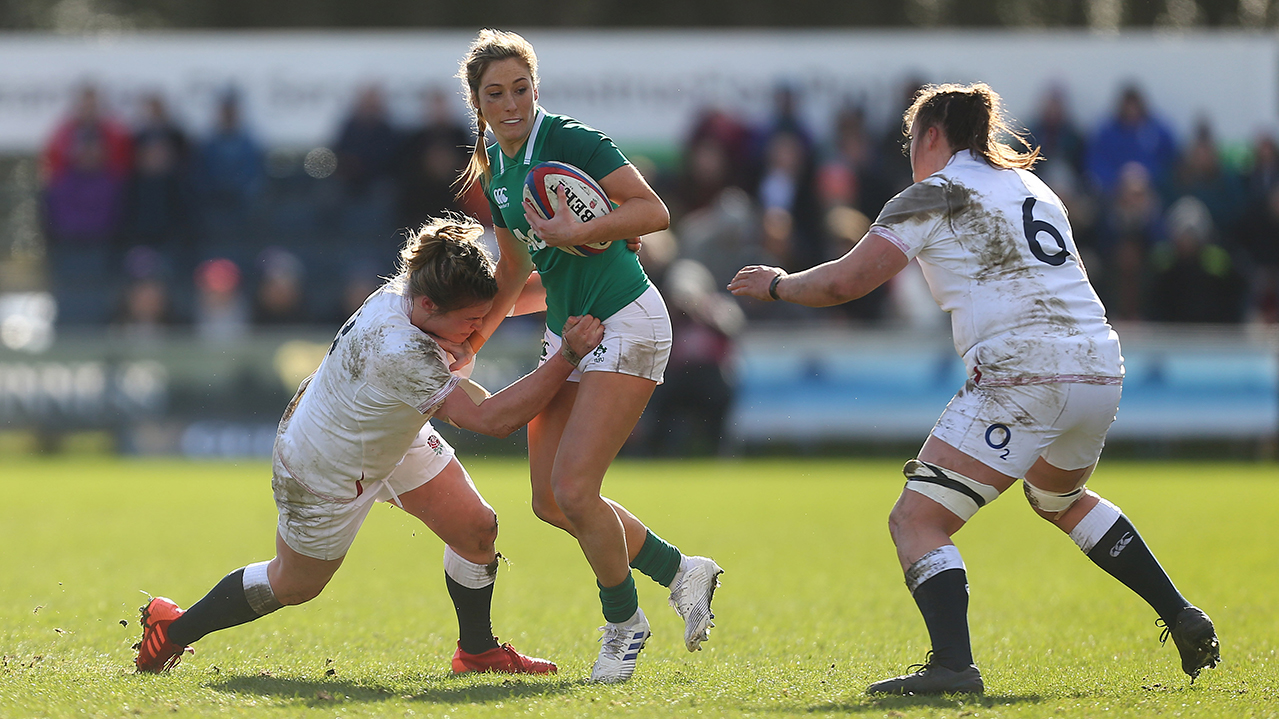 Eimear Considine of Ireland in action against Sarah Bern of England during the Women's Six Nations Rugby Championship match between England and Ireland at Castle Park in Doncaster, England. Photo by Simon Bellis/Sportsfile

For multi-sport athlete Louise Galvin, who has represented Ireland at sevens and 15s rugby, as well as Basketball, and played inter-county football for Kerry, the issue of professionalism is not limited to Ireland.

“We all heard [about the IRFU's] 20 job losses yesterday,” Galvin said on Thursday's show. “I am not saying that is a reason why we shouldn’t be professional, but it is certainly challenging times.

“Whether you go back to World Rugby who have stated in their strategic plan that their major focus for the next period of time is women’s rugby.

“That was all pre-COVID, but they have stated that developing the women’s game globally is a massive target.

Galvin started her rugby career off in the semi-professional Ireland women’s sevens setup, before transitioning to 15s.

She believes that there are some major differences between the two codes, preventing a fully professional 15s programme at the moment, including the larger numbers of players required for a 15s squad.

“I am someone that has come from the sevens professional programme, or we were semi-professional,” Galvin said.

“We had a younger demographic within that team and that’s probably why we survived.

“The girls are getting access to the best in terms of the HPC, but it is not something that you would be paying a mortgage on.

“With the 15s squad, this is surmising that it would be a similar contract basis [to the sevens contracts] I would imagine the 15s would be going on… it tends to be an older demographic in 15s.

“If you did offer someone to go professional, but you do it on less that €20k a year, then how many players would give up their job to do that? I am not actually quite sure.

“If that is the offer on the table at the moment, it is not professional in terms of what the men are getting.” 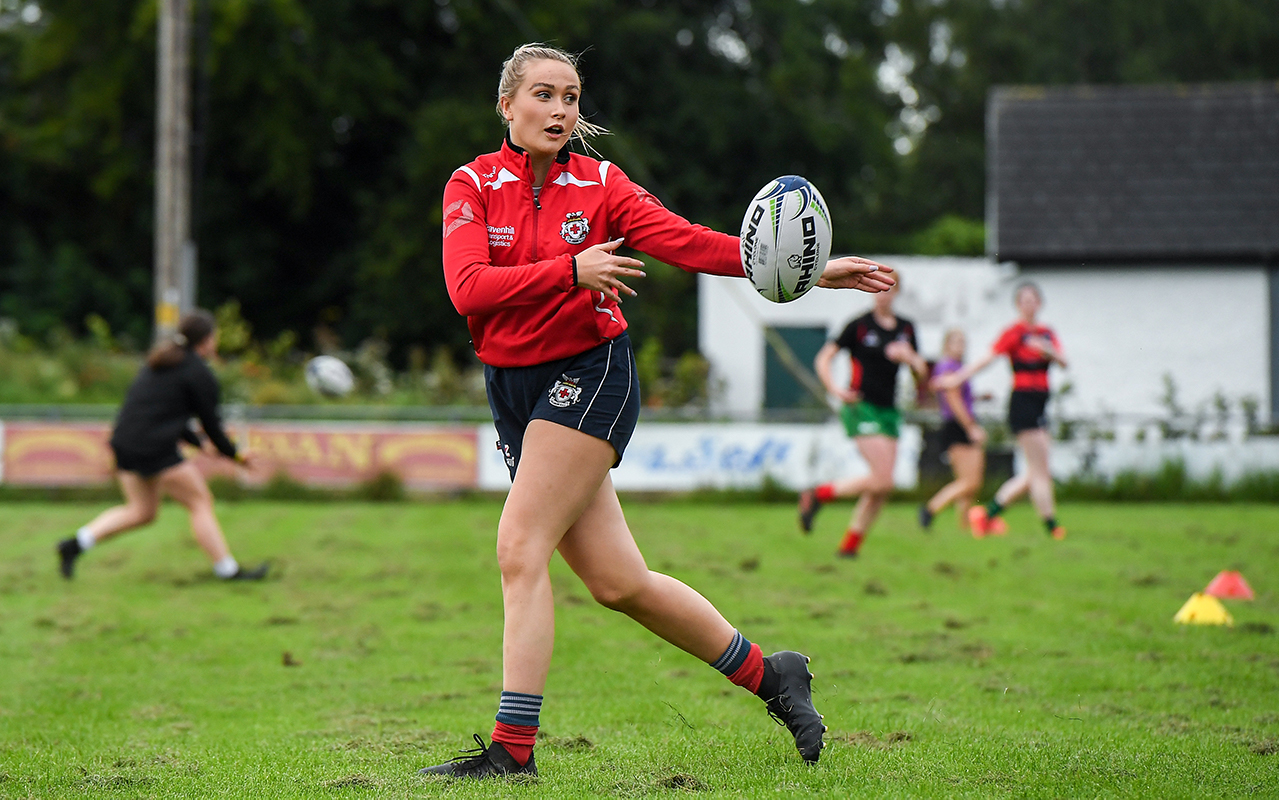 However, what is of bigger concern for Galvin is that currently there are no non-international matches or even training camps for girls allowed in Ireland.

While understandable due to COVID-19 restrictions, Galvin has stressed that this will make it increasingly difficult to develop young athletes to fill in at international level, while other countries’ domestic women’s leagues continue almost unabated.

“Another thing to look at besides professionalism is the domestic game,” Galvin said. “The English club system is so much stronger than what we have here.

“The French club system is so much stronger, and at the moment our domestic seasons have just been cut.

“Fair enough, the Irish 15s squad at the moment are getting really good exposure to camps, but let’s say we had five players injured at the moment, where are they going to get the next five players to replace them when no one is playing rugby in the country?

“That is certainly another level of concern that right now we could eb losing another generation of female rugby players because of COVID because there are no domestic games happening.

“I know that there’s no domestic games happening for the men either, but at least they have the provincial system. That is another cause for concern.”

Ireland will face Wales in their opening Women's Six Nations encounter on Saturday at Cardiff Arms Park. Kickoff is at 5pm, and the match will be aired live on RTE2.

The Women's Six Nations Show on OTB Sports every Thursday is brought to you in association with Guinness, proud partner of Women's Six Nations. Don't miss a moment of the action with LIVE match reports, analysis, reaction, and our in-depth interviews. #Never Settle. Drink responsibly, visit drinkaware.ie