If you haven't seen Netflix's Sunderland documentary, it's well worth a watch!

Sunderland 'Till I Die follows the club through their disastrous 2017-18 season in the Championship when they ultimately suffered a second successive demotion.

Manager Simon Grayson who was sacked midway through filming was the guest on The Keith Andrews Show this week.

And he gave Keith and Kevin Kilbane his side of the story. Later on during The Football Show, Keith and Kevin both discussed the pressure cooker environment in one-club cities.

Kevin featured for Sunderland between 1999 and 2003 at the height of his Ireland career. But the scrutiny and intrusion was something he found suffocating.

"It was just the scrutiny you were always under," he explained to Keith and Nathan Murphy.

"I'd signed and I remember I had a supporter [come up to me] and I was with my wife at the time. We went out for a meal and it was round about Christmas time when I signed because there was no deadline.

"It was actually the last window before the transfer window came in. So I had a Sunderland fan who just came in and sat beside us. Like as if he was entitled to sit with us and have a meal with us. 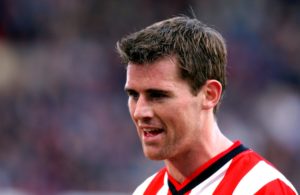 "He sat with us at our table for 20 minutes, asking me questions. You didn't want to say, 'Look, excuse me mate but will you leave?'

"I felt as if, 'You were owned'. Wherever you went across the North East. And I have had it at various football clubs. I've played for a big club in Everton, I played at Derby another big club, West Brom another big club.

"But there it was like, going to the supermarket, people would [look into the trolley and say], 'Should you be putting that in your trolley?' And it's not just Sunderland.

"I've spoken to lads that played at Newcastle and it was pretty much the same. I felt as though, personally, the scrutiny that you're under when you're going out for a coffee or shopping or a meal with your partners or wives, I just felt as though it was too much."

The 'Diego Maradona' documentary title was quite deliberate

'It was nerve-wracking' | Asif Kapadia on making Diego Maradona film

'Diego Maradona' by Asif Kapadia: A tale of two lost souls in one man